Genability's Jason Riley speaks at the White House on Energy

Some of the most exciting and innovative cleantech software companies gathered Monday in Washington, D.C for the first ever “Energy Datapalooza”. The event was hosted by the Obama Administration, Energy Secretary Stephen Chu and U.S. CTO Todd Park and included talks from a number of companies utilizing open energy data.  Genability’s CEO Jason Riley was in attendance and spoke to the crowd of entrepreneurs, policymakers and energy officials on the answer to our grid’s problem:  hot tubs! 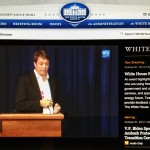 The Datapalooza included several exciting DOE announcements including a “Vehicles Data Challenge”; an initiative focused on increased fuel and vehicle efficiency.  Todd Park provided some GreenButton updates including that there are now 35 utilities committed to GreenButton.  He also announced the launch of “GreenButton Connect My Data” that enables consumers to transfer energy data to authorized 3rd parties.  The EERE also released several new datasets, including APIs for electricity generation, car comparison and biomass.  Finally, the EERE released a new challenge to entrepreneurs related to vehicle efficiency and new apps to support it.  Details of the $50,000 challenge will be released on December 1st by @ProjectOpenData.

The event would not have been complete without remarks from Secretary Chu.  Secretary Chu honored the winners of the DOE’s “Apps for Energy” challenge and discussed the importance of open data and the need for entrepreneurs to continue to develop apps that “advance a secure and clean energy future.”

We recently announced that Genability was selected as a SunShot Awardee by the U.S. Department of Energy. But what are we building?

Genability Awarded SunShot Funding by the Department of Energy

Today, we are thrilled to announce our new Partner Program, which offers a number of ways partner organizations can work with us.

San Francisco, New York, Boston and now Boulder. This weekend, Cleanweb Hackathon takes over Boulder! Genability is thrilled to sponsor another Cleanweb event and we are joined by Tendril, SendGrid, SimpleEnergy, Softlayer and VisionRidge Partners.