In 2012 we were thrilled to be a sponsor of the Cleanweb hackathon in New York.  The event was the weekend of 1/21 - 1/22 and, among others, was organized by Spring Ventures and Dynamo following on from the great job they did with organizing the first Cleanweb in San Francisco in the fall of 2011.

If the first Cleanweb in San Francisco this fall was any sign, we can expect to see some great  ideas.  We’ve expanded the feature set on the Genability APIs which now include:

And if you’re just getting familiar with the Genability APIs and plan to participate in the hackathon, be sure to:

We’ll also have a couple of Genabilists entering the hacking competition including Matthew and Michael who won the overall prize at the SF Cleanweb Hack with their TACO entry.  Here’s a list of all the finalists and winners from that first event.

As one of the sponsors of the Cleanweb Hackathon in NewYork this coming weekend, (1/21 - 1/22), we would like to spotlight some of the local utilities and associated tariff data that Genability makes available for usage and analysis.

Genability provides extensive residential data coverage for all of NY, NJ and CT.  The New York and Connecticut area has some of the highest residential electric rates in the country, almost twice the national average. Some of the dominant utilities in the areas are:

As is usually the case, the devil is in the details and our tools (APIs and Genability Explorer)  can be used to unbundle and gain insight into complex rate schedules and electricity price trends.

Reporting After the Hackathon

It was a great weekend at the NYC Cleanweb Hackathon.  Genability is proud to have been a sponsor to the standing room only event that gathered over 100 developers, an impressive panel of judges and special guest Aneesh Chopra, United States Chief Technology Officer.  Fifteen teams, including Genability’s team WattQuiz, presented their hacks and received awards.

After the successful hack weekend, Ecomagination caught up with Micah Kotch, Director of Operations at the New York City cleantech incubator, NYC ACRE (New York City Accelerator for a Clean and Renewable Economy) for a live interview.  Along with answering questions about his experience helping organize the first Cleanweb Hack in NYC and what makes a successful startup, Kotch answered questions from fans and followers via Facebook and Twitter.

The Green Room chat streamed live January 25th, at 12:30 pm EST but will be available for later viewing in the same player.

Roundup of the Projects

Genability recently participated in the 2nd Cleanweb Hackathon. The event was held in NYC so a few members of our team headed east to participate.  The first ever Cleanweb hack was held this past summer in San Francisco, in which Genability’s own TEAM TACO took first prize.  Genability was thrilled to be a sponsor again and while we didn’t win the event we had several hackers use our API and met some fascinating people – including the CTO of the US – Aneesh Chopra.  Cleanweb hackers from all over the U.S. gathered in NYC to create apps with APIs such as Tendril and NYC Open Data.

Some of our favorite hacks, including our own, were:

WattQuiz was built by Genability developers and aimed to be the energy equivalent of freerice.com.  Consumers could upload their personal energy data via Green Button Initiative and then answer questions about their usage.  Points (aka watts) would then be donated to various charities via donorschoose.org. 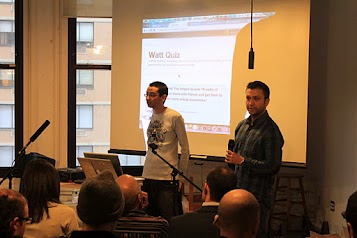 SolarList provides real-time cost calculations for solar installations and was built by Tyler Tringas and worked with Genability’s API.

AuditTrigger provides real-time assessment of a building’s need for an energy audit.  AuditTrigger was built on EnergyScoreCards.

Econofy was the crowd favorite and winner of the event.  Econofy is an online rating system for appliance manufacturers to compete with each other for energy efficiency appliances.  The application is currently in beta and utilizes an API from Tendril.

NYC BLDGS tracks energy consumption of NYC buildings to create a friendly competition against each other.

For a full list of all the hacks, check out this list from 3Scale.   Also, full coverage of the presentations can be viewed here.

Following the event, Genability got some one-on-one time with Aneesh Chopra to discuss the Green Button Initiative.  Genability is Green Button ready and you can start uploading your data.

Matching your Utility Bill in our Explorer Web Application

In 2011 there was a battle brewing among electronics retailers (Best Buy, Home Depot, and others), Telecommunications Companies (Verizon, AT&T & others) and Cable Companies (Comcast, others). The battle is for the control of your home, or...

While there has been much focus on the Solyndra bankruptcy in solar news lately, the U.S. project pipeline is seeing massive growth in photovoltaic project development due to large cuts over the summer in solar module prices....

Yesterday, I passed a MUNI bus stop here in San Francisco and something caught my eye. I’ve seen interactive bus stops before so seeing a couple of kids playing with the screen didn’t stop me to take...

Sunday, September 11, concluded the inaugural Cleanweb Hackathon. Fourteen teams of developers and engineers gathered together with the goal of integrating information technology and sustainable business through the use of diverse datasets and APIs. The CleanWeb Hackathon...