On March 1, 2019 Southern California Edison (SCE) will close its current default post-solar tariff (TOU-D-A-NEM2) and replace it with a new default post-solar tariff (TOU-D-4-9PM-NEM2). This tariff change will dramatically impact solar savings in SCE as the Time of Use (TOU) On-Peak hours move from 2-8 PM under TOU-D-A-NEM2 to 4-9 PM under TOU-D-4-9PM-NEM2. More importantly TOU-D-4-9PM-NEM2 introduces a Super Off-Peak period in the Winter from 8 AM to 4 PM, when the majority of solar production occurs.

What Will Change in Genability APIs?

How are Solar Savings Affected?

Nearly all customers will save less with TOU-D-4-9PM-NEM2 than with TOU-D-A-NEM2. We looked at the Avoided Cost of Power (ACP) for a customer that uses 10,000 kWh annually in each SCE baseline region under the old and new default solar tariffs and found ACP decreases across the board.

Why such a big change in ACP? It all comes down to the new Time of Use periods and the difference in the price from the previous periods.

How Do the TOU Periods and Prices Differ?

In the graphs below we show a typical summer and winter weekday under the old tariff (TOU-D-A-NEM2) and the new tariff (TOU-D-4-9PM-NEM2). All rates below reflect the first tier price with the Baseline Credit included.

While the new tariff name highlights the change in the On-Peak period from 2-8 PM to 4-9 PM, the biggest impact comes from the introduction of the Super Off-Peak period in the Winter. The new Super Off-Peak period is from 8AM to 4PM every day from October 1 through May 31 and provides the lowest net metering credit when the customer is most likely to be exporting kWh to the grid.

What Happens to Non-Bypassable and Minimum Charges?

Non-Bypassable charges are identical between the old and new default post-solar tariffs, so you will see little change there. We recently published another blog post on Non-Bypassable Charges and the alternate minimum they set for California tariffs.

Minimum charge calculations are also unchanged between the old and new default post-solar tariffs. That said you are much more likely to see the impact of SCE’s Delivery Minimums under the new TOU-D-4-9PM-NEM2.

Here’s an example monthly post-solar calculation under both TOU-D-A-NEM2 and TOU-D-4-9PM-NEM2. The customer has significant negative usage which results in just the delivery minimum under the old default tariff. But under the new default tariff the customer’s bill is nearly quadrupled due to the positive Generation Charges. 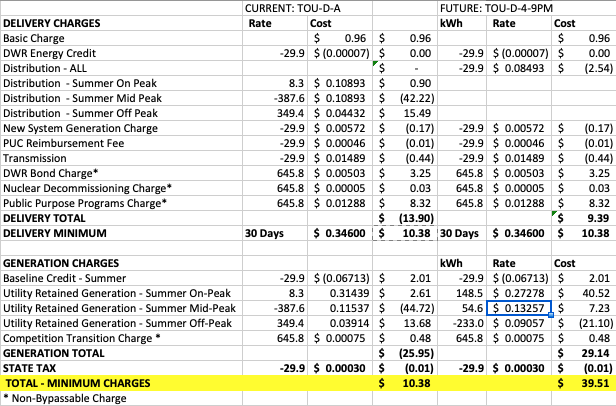 Which Systems Generate the Best Avoided Cost of Power (ACP)?

TOU-D-4-9PM-NEM2 is not the only choice available to new customer’s with solar. They can also opt for TOU-D-5-8-NEM2 or the new TOU-D-PRIME-NEM2 (called the TOU-D-C in previous rate filings).

TOU-D-5-8-NEM2 offers a short On-Peak period but a higher differential between On-Peak and Off-Peak prices. This rate is likely best used in concert with a storage system that can bank excess generation during the day for release during the shorter On-Peak period. With solar only, we see that the TOU-D-5-8-NEM2 offers decreased savings of roughly 0.3¢/kWh across all offsets and load sizes, as compared to TOU-D-4-9PM-NEM2.

TOU-D-PRIME-NEM2 has the same Time of Use structure as the 4-9 PM tariff, but does not have the Baseline Credit. This rate structure is ideal for large power users who will happily pay more for the power that would otherwise receive the baseline credit in exchange for a lower rate applied to high usage amounts. In our analysis we saw that TOU-D-C-NEM2 started to reach ACP parity with TOU-D-4-9PM-NEM2 when the load reached 15,000 kWh per year and we saw up to 0.5¢/kWh increase in ACP when the load reached 20,000 kWh annually.

Genability is here to help you navigate these new rates. Our number one recommendation is for you to start running calculations against the new rates immediately and use Dash and Explorer to help you understand how the new rates behave. There will be a path forward for solar in SCE, even as the duck (curve) comes home to roost.

Review of California's Proposed Commercial Time of Use Electricity Tariffs

In 2019, both Pacific Gas & Electric (PGE) and Southern California Edison (SCE) will introduce new Time-of-Use (TOU) periods for commercial tariffs. Both utilities are moving highly-priced peak hours later in the day, from mid-afternoon to 4-9...

The roller coaster for solar in the U.S. (call it a Solar Coaster?) keeps rolling this summer.  The state of Illinois has finalized the credit values for its Adjustable Block Program, which provides solar owners with an...

Later this year, Massachusetts will close out it’s SREC program replacing it with the new Solar Massachusetts Renewable Target (SMART) incentives. While there are still a few details left to be finalized, Genability is able to model the proposed SMART incentives...

At 9 AM this morning (July 9, 2018), Duke Energy North Carolina started accepting incentive applications for their Solar Rebate program and Genability has made the new incentive available via our Incentives API.