Update: On June 23, 2016 the CPUC revised an earlier decision and determined that “imports and exports to the grid shall be netted within the metered interval and non-bypassable charges should only be charged on the net import from the grid in the metered interval (Resolution E-4792).” Genability Switch results for NEM 2.0 markets will not utilize coincident import & export features described below. We will enable this feature for markets where exports are assigned differential value on a real-time basis. 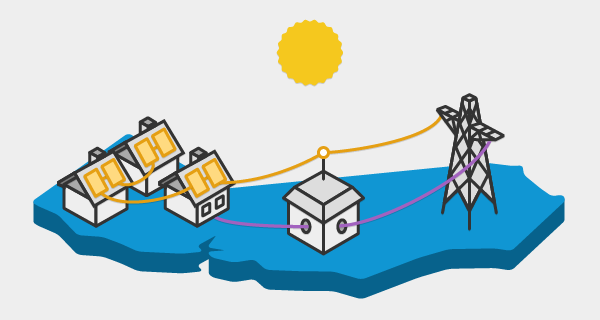 New regulatory policy and corresponding tariff changes in California and Hawaii mean more complexity in forecasting solar savings. Genability has you covered. We’ve added enhancements as part of Switch Version 4 to improve your savings analyses amidst these new rules. This includes new algorithms to determine how much energy is exported to the grid at any time during the day, all without any additional changes to your quoting platform or sales process.

Encouraged by the existing Net Energy Metering (NEM 1.0) program, California has led the way in rooftop solar growth over the last few years. Under this program most Californians going solar receive full retail credit for energy their solar system exports to the electricity grid.

In January of this year the California Public Utilities Commission (CPUC) approved the framework for a successor to the existing NEM 1.0 program, referred to as NEM 2.0. This will roll out to new solar customers over the next year as each of the three California IOU utilities reaches its existing program cap. With NEM 2.0, new solar customers still receive retail credits for most charges on their bill. However, a number of so-called non-bypassable charges are no longer rolled back at full retail rate when solar energy is exported to the grid. These fees fund public projects such as nuclear decommissioning and are typically a small part of your bill. Also under NEM 2.0, new solar customers are required to switch to a Time of Use (TOU) plan (whose rates vary by time of day), except in SDG&E where mandatory TOU requirements are on hold until a later date.

Switch customers can now model customer savings using both California’s NEM 1.0 and NEM 2.0 systems and receive the industry’s most accurate savings forecasts. The difference in savings between the two NEM programs depends on a customer’s electricity usage patterns and the corresponding size and energy production of their solar system.

Note that anyone interconnected before the cap expires will remain on the NEM 1.0 rates for 20 years following their interconnection date.

California is not the only state that has historically benefited from NEM but is now experiencing some big changes. In Hawaii, high electricity prices drove one in four single family homes to have rooftop solar. In aggregate all these installations can intermittently export large amounts of energy back to the electricity grid. Citing grid stability concerns, Hawaiian Electric Company ended their  NEM program to all new residential solar customers last year.  Similar to California, existing NEM customers will be grandfathered for 20 years from their interconnection date.

What’s replaced it? New solar customers in Hawaii now have two choices. Option one is called Customer Self Supply (CSS), is very different from NEM, and is truly a first for the solar industry in the US. Any home adopting the CSS tariff cannot export any electricity to the grid. In practice this means the home must also install energy storage or other approved load shedding technology to store excess energy produced by the solar system. To encourage this, homes will receive expedited interconnection.

Option two is Customer Grid Supply (CGS) which is similar to what it’s replacing, in that exported energy does generate credits. However, these credits do not add up to full retail rates, and are only guaranteed for 2 years. There is a very low cap on how many systems can qualify for CGS, the tariff will likely close in late summer of this year.

CGS customers will have dual register metering systems installed as part of interconnection. This will accurately track two values over time; i) the amount imported by the home from the grid, and ii) the amount the home exported to the grid.

We’ve updated Switch to support changes in Hawaii and California. A critical part of supporting these policy changes is intelligently forecasting how much energy is exported into the grid at any point in time. We’re now able to determine coincident import and export values without having granular consumption and production data.

At any moment in time, a home with rooftop solar could be either importing or exporting from/to the grid. The home will import electricity when all the appliances, HVAC, etc. are consuming more energy than the solar system is generating in that instant. Similarly, the home exports energy when the solar system produces more than the home is using in that instant. Coincident is how much solar production lines up with electricity usage in that instance. Under full retail rate NEM this wasn’t important because a home would get the same rate credit for exports and rate charges for imports. These new tariffs credit exported energy at a new lower rate, so it’s important to accurately forecast the two separately.

With this upgrade, Switch calculates coincidence and determines import and export levels. We take usage and solar production values for each hour in a year, and forecast how this will translate into the amount imported and the amount exported during that hour. Our algorithm takes into account the relative size of the load vs solar production as well as the inherent variability in both. For instance, in late evening when the sun is setting and homeowners are back from work, the algorithm may predict all solar goes toward offsetting usage – i.e., 0 kWh exported – since production is much lower than consumption with little variability. However, for certain hours when consumption and production are similar, as is common in the mornings, the Savings Analysis call will carefully calculate how much usage is imported, how much solar goes to offset usage, and how much solar is exported to the grid.

Despite the complexities introduced by assigning different values to self-consumed vs. exported electricity, Genability Switch still gives accurate savings forecasts. This is made possible by accounting for the fact that household load and solar production may not be equal every minute, even if net export is 0 over the course of an hour.

How Can I Take Advantage of These Upgrades?

For those already using Switch, no additional parameters need to be specified in Savings Analysis calls to model the coincident import/export pricing – you only have to ensure that your call references the correct post-solar tariff (e.g., PG&E’s E-TOU-A or E-TOU-B). These calculations support the usual monthly consumption values by taking advantage of our Intelligent Baselining feature.  Genability will continue to track policy changes in California and elsewhere to ensure that Switch calculates savings accurately and always per released tariffs.

Creating Savings Analyses under California’s NEM 2.0 and grid export systems in Hawaii are just a few of the powerful new additions in Switch V4. You can learn all about Switch here.

For those not using Genability’s Switch API, we’re happy to show how this and other Switch v4 upgrades can help your team. Contact sales to set up a demo of Switch.

Net energy metering (NEM) has been a critical driver in the growth of residential solar over the past decade. There is an ongoing debate between utility companies and proponents of solar energy as to whether net metering...

The Clean Power Plan (CPP), finalized last week, is the most significant regulation of greenhouse gases in U.S. history. Since passing the Clean Air Act in 1963, the federal government has played a critical role regulating air...