Researchers at MIT are hard at work on the problem of solar efficiency, and lowering the cost per kilowatt on solar panels. A few weeks ago, senior researcher Jeffrey Grossman presented his findings on a new type of solar architecture published in the journal of Energy and Environmental Science, which he claims can “open new avenues towards Terawatt scale generation.” 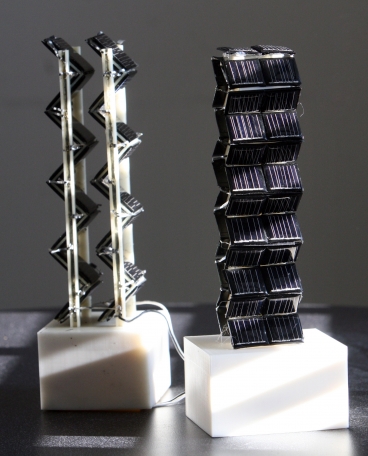 Grossman and his team found that while intuitively it makes sense to lay solar panels flat in order to capture the trajectory of the sun’s beams, the two-dimensional panels miss out on the vast majority of possible power production throughout the day, in order to capture the short term benefits during the pinnacle of on-peak production. Cubic designs help capture solar energy at a more stable baseline throughout the day, and “can nearly double the number of peak hours available for solar energy generation, provide a measured increase in the energy density by a factor of ~2–20 without sun tracking with even higher ﬁgures in the case of cloudy weather, and reduce the large variability in solar energy generation with latitude and season found in non-tracking ﬂat panels.”

Using Monte Carlo and generic algorithm simulation standards, the team has shown that the two main forces making this design so successful is: the avoidance of intercell shading, and the utilization of reflected light from respective solar panels onto others. This not only gives an amplified output of solar production, but it also makes the generation capacity more predictable, as more factors are under the control of the design itself, as opposed to big ball in the sky we call the sun.

Solar manufacturers haven’t begun implementing this design in their products yet, but the first ones to do so will benefit from a significant comparative advantage. (Assuming they can find an economically efficient method of constructing them). This new construction design will open all sorts of doors for energy businesses and enthusiasts looking to maximize demand response capability, distributed generation capacity, and smart grid development. Thanks to the contribution of these researchers, the day just got a little brighter in the world of solar development.

Get ready to change the way you think about your electricity bill! The Department of Energy (DOE) just announced the details for its Apps for Energy competition.  The DOE is challenging developers to use Green Button data...

24 hours after the Green Button initiative was announced in January, Genability Explorer and APIs supported the Green Button XML format, and with good reason.  The two requirements for precise electricity pricing are correct tariff data and...

An Insight into Net Metering

While net metering is nothing new in the world of energy, for the past 20 years, more and more investor and state owned utilities have been expanding these policies to make it easier for consumer to become...

In 2012 we were thrilled to be a sponsor of the Cleanweb hackathon in New York.  The event was the weekend of 1/21 - 1/22 and, among others, was organized by Spring Ventures and Dynamo following on...