Investigating the Effect of California’s NEM 2.0 on Solar Savings

Update: On May 31, 2016 PG&E closed the residential time-of-use tariff used in this analysis (E-6) for new enrollment and added ETOU-A and ETOU-B as new options for residential customers. Genability Switch was updated on that day to reflect the current options for customers switching to time-of-use. More information about the new tariffs is found here on PG&E’s website.

In January, the California Public Utilities Commission (CPUC) approved new net metering rules, which define how utility companies bill customers with rooftop solar. Largely hailed as a victory for advocates of the distributed solar industry, the NEM 2.0 policies change how the utilities calculate costs and credits for solar customers.

Through 3,000 simulations, Genability investigated how these new rules will impact solar savings. Note that these simulations are based on the NEM 2.0 versions of the utilities’ residential tariffs as of February 2016; updated analyses will be provided soon based on recent changes to the relevant tariff schedules.

From these simulations, we found that NEM 2.0 can have a relatively small effect on savings on average. And more interestingly, NEM 2.0 may lead to greater savings in certain cases.

Once the NEM 1.0 rules expire in 2016 and early 2017, potential solar customers served by Pacific Gas and Electric (PG&E), Southern California Edison (SCE), and San Diego Gas and Electric (SDG&E) will have their solar savings impacted in two major ways1,2:

Per the CPUC’s January ruling, both of these factors are resolved hourly, meaning the utility calculates charges from hour-to-hour. Note that SDG&E customers will not need to switch to a TOU rate structure until a later date (several months after the onset of NEM 2.0).

The analysis below focuses on the rules approved in January’s CPUC decision and February tariff schedules. We will publish follow-up analyses as needed with new electricity tariffs including those still requiring approval by the CPUC.

How will NEM 2.0 affect solar savings?

Using Genability’s Savings Analysis product (our Switch API), we ran 3,000 simulations to compare savings for new solar customers under NEM 1.0 and NEM 2.0 rules. These simulations reflect randomly-selected combinations of monthly usage and solar production levels that are typical of cases run through our Switch API. These scenarios generally feature total annual consumption between 9,000 and 17,000 kWh, and solar installations that offset between 60% and 100% of this annual consumption. A more detailed explanation of our simulation procedure is included at the end of this post.

Ultimately, we found that NEM 2.0 has a relatively modest effect compared to NEM 1.0: over all the simulated savings analyses, there was only a 2.8% difference on average in first year solar savings ━ and this was a 2.8% increase in savings.

Similarly, the bar graph below shows the average amount of savings in utility costs per year thanks to solar (i.e., what you avoided paying the utility). 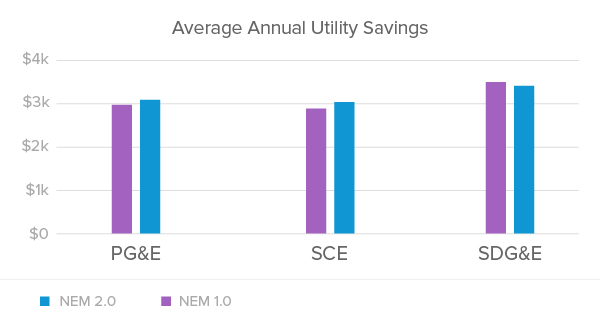 Both the chart and bar graph highlight the relatively comparable savings seen under each of the NEM conditions. That said, PG&E and SCE customers can actually benefit from the NEM rule changes: nearly 95% of the simulated PG&E customers and more than 95% of the simulated SCE customers saw higher savings under NEM 2.0 versus NEM 1.0. More specifically, annual savings increased by 5.7% ($146.20 in the first year) on average for the PG&E scenarios and 5.3% ($149.80) on average for the SCE scenarios.

We also assessed the effect of the new rules by examining the rate a customer pays to the utility for power after having gone solar (i.e., yearly amount paid to the utility divided by the total kWh delivered by the utility). The plots below depict the distribution of these post-solar rates: 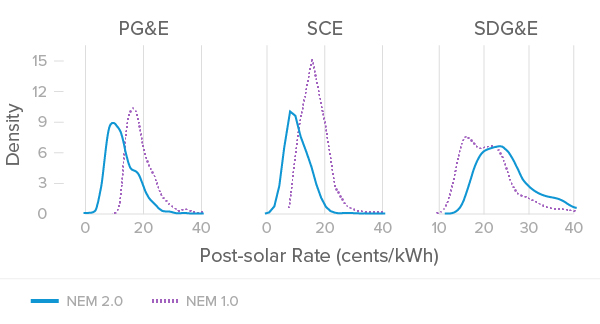 As expected, the plots indicate that solar customers would pay higher rates to SDG&E under NEM 2.0 versus NEM 1.0 conditions, while the reverse is true for PG&E and SCE.

Overall, the non-bypassable charges appear to impact solar savings only slightly. In the PG&E and SCE NEM 2.0 scenarios, the switch to a TOU rate generally has a much larger, and often positive, effect on savings3.

How we ran this analysis

We determined 500 usage and production scenarios that are representative of potential rooftop solar customers served by each of the three California IOU utilities.

As a single hypothetical example: we used Genability’s APIs to create an account for a customer, John Smith, at 123 Genability Drive, San Francisco, California, 94114. We then created annual usage and solar profiles and uploaded them to the John Smith account.

For the John Smith scenario, we then ran a Savings Analysis call where the pre- and post-solar tariffs were the same ━ both PG&E’s E-1: Residential rate schedule; in other words, pre_master_tariff_id = post_master_tariff_id = 522 in the API call, where 522 denotes PG&E’s default residential tariff in Genability’s database. The results of this Savings Analysis call represent the NEM 1.0 case.

Next, we ran a nearly identical call, but set the post-solar tariff to the NEM 2.0 version of E-6-TOU: Residential - Time of Use. For this, we also set useIntelligentBaselining = true in the API call, which interpolates hourly usage data from a single monthly kWh reading (as described in a previous blog post). Altogether, this second Savings Analysis call predicts costs and solar savings under California’s new NEM 2.0 rules. We then compared savings under the NEM 1.0 and 2.0 conditions.

1 A one-time interconnection fee is also now allowed, but this is not part of the electricity tariff.

2 The invester-owned California utilities (PG&E, SCE, and SDG&E) have recently asked that charges be resolved at a sub-hourly level. The CPUC is expected to respond in the coming months.

3 Particularly for cases where the solar customer’s annual utility charges were above the annual minimums.

The solar industry received great news yesterday when the California Public Utilities Commission approved their proposed decision on NEM 2.0. All major elements of net metering were upheld with no new fixed or demand-based charges. Under NEM...

The month of January is when a majority of utilities release their updated rate plans for the new year.  It has been a busy time for the Genability data team as we reviewed and updated over ten thousand rates...

Today and tomorrow are the first Peak-Day Pricing (PDP) events of 2012 for Pacific Gas & Electric. That means that for commercial customers throughout Northern California electricity is about to get very expensive.