In this blog post I’d like to do a thought experiment on the potential benefits should the merger result in Tesla selling a unified product that includes an electric vehicle and an electric generation system (car, solar, battery). Let’s call it the “Big Bundle”. 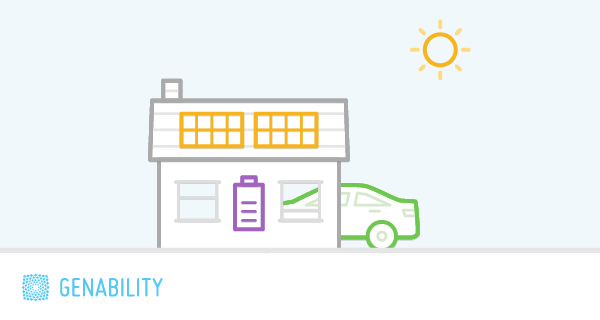 At Genability, we’ve been thinking about what the new energy future might be, pretty much all day, every day, for the last six years. To me, it feels inevitable that i) a sizable portion of our energy generation will be distributed, ii) distributed storage and load intelligence will have to be used to smooth intermittent supply, and iii) we will electrify the vast majority of our transportation. I could be wrong. I hope I’m not. But we are certainly heading in that direction.

If this hypothesis is true, then the interesting question for me is: what business models will succeed? You have an industry that has historically been dominated by local, regulated monopolies — not the traditional hotbed of business innovation. The outcome of the proposed merger of Tesla and SolarCity could turn out to just be an ill-advised bailout (as some have suggested), or a well timed acqui-hire type transaction that helps Tesla become better EV+Battery company with a bit of solar on the side. Or, it could be Elon Musk’s next significant step in his master plan.

Now let’s return to the thought expirament – This is not my prediction of what the two companies will actually do — while both Tesla and SolarCity are Genability customers, this is not based on any insider knowledge of whether the companies are thinking “Big Bundle” or not. It’s purely “what if”.

Want to buy a Big Bundle?

Driving an EV changes your relationship to electricity in fundamental ways. First, you think more about what it costs, where it comes from, and when you use it. In talking to our friends at BMW and elsewhere, it’s clear that EV owners show a heightened interest in solar. Lets assume (pretend?) that Tesla wants to go all-in and bet on that sentiment. It takes its strong brand, massive battery factory, and bolts on the head start(?) of the market leading solar company to put a car, solar and home battery system into one lovely, big new energy product. Then it sells it direct. And I’m not talking a la carte here. Meet the “Big Bundle”.

What advantages would the Big Bundle need to make it a huge winner?

Let’s start with the obvious one: If selling solar with every cars makes sense, then that would take a sizable chunk out of the estimated $4,000 customer acquisition costs most solar companies currently experience. Imagine including a solar install with those 400,000 pre-orders for the Tesla Model 3. There were 17.5mm cars sold last year in the U.S.. We’ve just crossed the 1mm homes with solar mark counting up all home solar systems. Ever. The Big Bundle would beat pure solar on price and scale.

The car industry has got pretty good at providing attractive financing for the purchase of a car. Auto loans have large pools of capital, mature providers and liquidity. It’s understood by consumers. Now that solar is growing and getting cheaper, solar financing is getting better. But by piggy-backing on auto financing, the Big Bundle would have a significant advantage. There are two additional benefits to financing a bundle rather than the panels alone: First, auto financiers know how to take back your car if you stop paying. No solar company repossesses your solar system if you don’t pay. And second, once repossessed, a car has value on a liquid resale market. Who would the bank sell your solar panels to if they took them off your roof? With a bundle loan, any excess equity in your repossessed car could offset losses on the panels. Admittedly, the car’s resale might not always be enough to cover the remaining balance, but across a portfolio, the risk is reduced vs pure solar loans.

Big Bundle gets cheap financing. If panels continue to come down in price at the dramatic pace they have been, it might not cost much more than repairing those 21” rims.

Three. Fuel savings are Productized Too

Now I start getting excited. Big Bundle solar, battery and the car together and you are selling the fuel and the transport. Tesla would be tangibly baking fuel cost savings into their revenue stream. No more “this other check you write to this other company will be lower” sales pitch. Imagine if GM were able to sell you the car and its lifetime of gas (without much fuel cost risk)? Whooa Nelly!

Car companies haven’t historically had to come to your house. The EV experience is greatly improved if you have a good fast charging option at home (as a Tesla driver, trust me, it’s night and day). In an unbundled world, installation and maintenance of your home charger may be best provided by a third party (Genability customer ChargePoint is starting to do just that). Tesla may think smart home charging is too important to outsource. SolarCity has put a lot of time and effort into better truck roll operations, and are closer to national coverage than anyone else. If you are going to (truck) roll, why not roll for a Big Bundle? If bundle beats unbundle, Tesla + SolarCity has one hell of a head start.

What-If’s are fun, but reality bites

In the real world, rather than my “what-if” one, a Big Bundle-only strategy faces big challenges. For starters, there are lots of potential EV drivers that rent a home, live in a state that prohibits solar, have a big tree shading their roof, think solar is communist, and on and on. Selling nothing but a Big Bundle would be very audacious. But that doesn’t mean that without a pure bundle strategy, there isn’t value to Tesla from SolarCity. Beyond the points above, think about the “steel in the ground” expertise that SolarCity brings to Tesla’s SuperCharger work.

Even if practical, I’m not sure that bundle beats unbundle in this case (in ten years will iOS beat Android, Native Apps beat HTML?). Maybe there will only be room for one “Apple of EV” (might be Apple!). It does seem likely that Tesla will sell EVs without home batteries, and home batteries without Solar, via channels and not just direct. Unbundled and bundled options. Regardless, I think this stuff is fascinating, hope the merger goes though, and look forward to seeing what comes of it. For our clean, abundant energy future to get here quicker, lets hope some of this “what-if” comes true.

Jason is founder and CEO of Genability

Net energy metering (NEM) has been a critical driver in the growth of residential solar over the past decade. There is an ongoing debate between utility companies and proponents of solar energy as to whether net metering...