In an effort to combat fuel prices and urban pollution, this morning San Francisco Mayor Edwin Lee signed off on the Zero Fuel, Zero Emission (ZFZE) transportation act. Starting next year, the city will begin collecting canine excrement and using it to power public transportation. 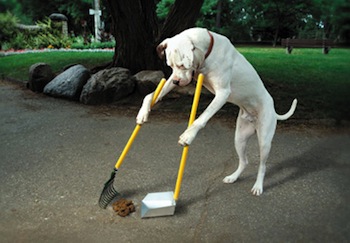 Similar to how farmer’s use cow dung and horse manure to stoke fires and for various other uses, canine excrement will be used to drive the city’s transportation system. A small five gallon modular excrement-converter will be installed on buses and street cars and will provide enough energy to power a bus for around four hours, more than enough time to complete one route before stopping to reload.

To incentivize people to contribute to this, the city will install excrement collection stations throughout the city where residents can turn in their bags of doggie excrement. Pricing has not been finalized yet but the city is considering paying $2 / lb. for mixed breed and a whopping $5 / lb. for pure breed excrement.  Studies at California Berkeley showed that pure breed excrement burns at a higher temperature and therefore can burn for longer, while burning with a cleaner smell.

While many residents and local politicians are hailing this as a landmark achievement, this decision has not been accepted across the board.  Many residents are disgusted by the toxic smells that will surely arise out of this, but Lee assures us that “just like farmers have gotten accustomed to the smells of cow dung, so will the people of San Francisco get used to the smell of canine excrement.  And when you consider the savings on fuel and pollution, it really is a win-win for everyone.”

Plans for beginning the rollout are already in play, with the first doggie doo powered bus scheduled to begin service in exactly one year, on April 1, 2012.

Genability Covers the Majority of US Residential Electricity Rates

Controling Vampire Power to Save on Electricity Bills

Energy Vampires account for 10 percent of residential electricity use. Solutions abound: get energy bars for all your gadgets, and use them! Try out The Energy Detective, which measures how much energy is being used in the...

Do the same things and still save money on electricity

Joe Energy User:  “So I know I should be better about turning off the lights and using less electricity, but what’s that really going to save me?  A few dollars here and there?”

If you’ve never spent any time thinking about electricity rates, you’re not alone.  For the past century electricity consumers have been supplied with cheap, reliable electricity on the unspoken condition that we don’t notice that our local...

Solar and Time of Use Tariffs

Every time I see solar-panels littered on rooftops, I think “Now there’s someone who is choosing to make a positive impact on the world around them.”