Genability has Electricity Rates for the Netherlands

We’re pleased to announce that we’ve added Dutch residential utility rates to our database! Our list of covered countries now includes the US, Canada, Mexico, Australia, South Korea, UK, France and the Netherlands.

The Netherlands population is just over 17 million and the average household consumes about 3,300 kWh of electricity per year. The country’s large coastline heavily influence its climate, producing cool summers and moderate winters. This along with relatively smaller homes (1200 sqft on average) contribute to lower energy consumption. In comparison, an average household in California uses 6,700 kWh annually.

Residential customers in the Netherlands pay between €0.16 and €0.20 per kWh, placing them among the top ten countries in Europe with the highest electricity rate.   High prices are primarily driven by government taxes and fees that fund both low income consumers (each customer gets a €25.71 credit against their monthly bill) and efforts to migrate to more renewable sources of energy.

Like most of Europe, the Dutch electricity market is deregulated giving customers the ability to shop for an energy supplier that meets their needs. Similar to Texas, the United Kingdom and most of Australia, the Netherlands requires each customer to choose their electricity supplier, rather than be defaulted to a provider of last resort. While customers are free to pick from 35 different suppliers, over 80% opt for the top three suppliers (Essent, Nuon and Eneco aka Stedin) and 99.5% of customers are served by the top seven (see chart below). 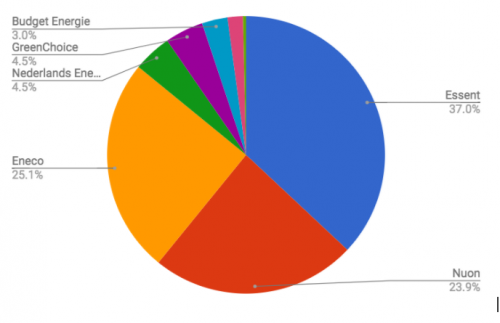 You Choose Your Tariff

There are over 8 million residential electricity customers in the Netherlands subscribed to one of about 250 tariffs, offered annually by electricity suppliers. Since a customer is required to pick their supplier, that decision likely hinges on the rate plans offered by suppliers. While each supplier offers its own flavor of tariffs, targeted to different customer needs, there are similarities across supplier offerings. Common choices customers see when selecting a plan include:

The Dutch suppliers label their time of use tariffs Dubbele Meter tariffs, for the two meters that are required to measure on versus off peak usage. Only customers that already have a double meter can subscribe to these tariffs.

A couple of points worth highlighting when using Netherlands tariffs in Genability’s tools. First, we’ve organized and presented the Netherlands tariffs completely in their native language (Dutch) rather than English.  This applies to tariff names, rate names, time of use definitions, tariff properties and territory names.

Secondly, we have collected and are making “Supplier” tariffs available for customer use, rather than the distribution utility’s tariffs. Unlike other markets, supplier tariffs in the Netherlands are more standardized, manageable and publicly available, similar to regulated tariffs in the US. Dutch customers are also more familiar with their supplier and supplier tariff since each customer picks their plan and is billed by their supplier.

If you are interested in accessing Dutch rates contact sales to find out about availability and licensing.

Ruben is a Senior Data Analyst

Our Developer Site Gets a Major Update

Our New Office at 455 Market, a LEED Platinum Building

Our Developer Site Gets a Major Update

If you haven’t visited our developer website in a while, you will be pleased to see we have completed some major improvements.

We’re pleased to announce that Genability has added French residential utility rates to our database! Our list of covered countries now includes the US, Canada, Mexico, Australia, South Korea, UK and France.

Over the last 6 months or so we have put quite a bit of work into improving the documentation on our Genability Developer Network (GDN) site. This reflects some of the improvements and additions to our suite...

Signal, Why it's the Best Utility Rate Engine

Many companies, including some utilities, have attempted to build utility rate engines. While most have ultimately failed or abandoned development due to the complex challenges involved, others cut scope and developed solutions for narrow use-cases. Signal is...