Texas is more than a month into a brutal heatwave that is straining the electrical grid and setting temperature records, electricity usage records, and power pricing records. It was 105 degrees F in Austin and 109 degrees F in Houston over the weekend and those triple-digit temperatures are expected to continue until it cools down to the high-nineties later this week. 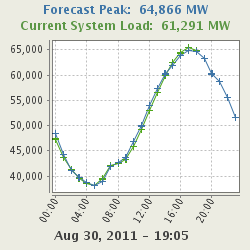 ERCOT suggests that, “Consumers can help by shutting off unnecessary lights and electrical appliances between 3 and 7 p.m., and delaying laundry and other activities requiring electricity-consuming appliances until later in the evening.”

If you want to take control of your power you need get access to your own real-time energy consumption data. (Preferably on your smartphone or at least through a web-service). Don’t worry we’ll walk you through the...

Rob Day recently released an interesting article on GreenTechMedia entitled “The Rise of Information-Based Cleantech.”  His main point is that over the past decade most ‘Cleantech VCs’ poured tons of cash into commodity-oriented cleantech plays that really didn’t fit...

If you catch one of the PG&E SmartMeter (tm) ads on TV, you might get excited by what they promise. The ads are slickly produced, with customers describing how cool it is to ‘See Your Power,’ receive...

If the average customer doesn’t understand how electricity prices are structured, how are they going to save money on their bill? The recent Deloitte reSources 2011 Study indicates that only 38% of people claim they understand the...